The full timetable is available from the SŽDC website as individual PDFs. Note that the ČD website shows only their services.

Station departure sheets can be printed from the SŽDC website, while train formation details can be found on the ČD website.

Železniční Jízdní Řád. Less useful than for previous years as shows only ČD operated services and the ČD owned funicular railways and cableways. Other operators trains are NOT shown. Printed in Czech throughout but with general instructions in English, German and French. Timetable supplements are issued (09 June 2019) but from this year only issued online. A fold-out, near-geographic route diagram is included in the timetable, and there are enlargements of the Praha, Brno and Ostrava areas.

Additional Notes on reading the Timetable

It is possible to reduce the volume of information by selecting a specific route ("Trať") or region ("Kraj"), or clicking on a region on the map.

Access the IDOS website and click on the English (or German) icon (given by small flags) in the bottom right hand corner. Enquiries can specify 'train only', 'bus only' or a combination of these (the default option), plus public transport in Brno, Ostrava and Prague.

ČD offers its own All-day ticket (Celodenní jízdenka). This is much better value than the standard One Country passes and includes tickets valid on the entire network for a time period, tickets valid only at weekends and also regional tickets.

Ticket machines offering zonal fares for journeys up to 100km are installed at larger stations, and particularly near Praha. These machines take coins or prepaid smart cards.

Since 1 January 2003 infrastructure has been managed by the state organization Správa železniční dopravní cesty (SŽDC).

There is an isolated 1500 V dc branch in the south from Tábor to Bechyně and Retz (Austria) - Šatov - Znojmo is electrified at 15 kV AC.

The Transport ministry decided in December 2016 that SŽDC must convert all 3 kV DC lines to 25 kV AC in a programme to be implemented between 2025 and 2040. It seems Tábor - Bechyně and Šatov - Znojmo will not be converted.

Rule of the road

Right-hand. Bohumín - Břeclav converted from left-hand to right-hand running on 9 December 2012. An unusual flyover arrangement existed at the eastern end of the Přerov avoiding line to effect a changeover, now no longer required. Most double-tracked routes are reversibly signalled and often used as such.

The Network Statement for Timetable 2018 Annex B gives the total length of each line in column 5, in addition to other information.

The following timetable routes are operated by, and where marked by (*) the railway infrastructure is owned by, private companies.

With the 2007 timetable, a number of services were withdrawn by ČD but summer only Private Operator services are timetabled, see Czech Republic - Older General Information below.

Rail cycling is possible on a number of lines; see the IG Draisinenfahrten website. Click on 'International', followed by 'Draisinenlinks' to obtain website details under the heading 'Draisinenstrecken in der Tschechischen Republik (CZ)'.

'Green' Line A was extended westwards from Dejvická to Nemocnice Motol on 6 April 2015.

Details and map can be found in "Tram Atlas of Mitteleuropa" by Robert Schwandl (2017).

A track plan is available on the Doprava website.

Details, maps and track plans can also be found in "Tram Atlas of Mitteleuropa" by Robert Schwandl (2017).

Projects under way or planned

170 The Praha - Plzeň main line cut-off west of Ejpovice was fully opened on 09 December 2018, resulting in the complete closure of the former curved route between between Plzeň Doubravka and Chrástu u Plzně, which is likely to become a cycleway. The cut-off comprises twin tunnels, the southern bore of 4150m being opened on 16 November 2018, when through operation of the 6km former route ceased, and the northern bore of 4174m opening for freight on 07 December 2018 and for passengers two days later. The section of old route from Ejpovice to Chrástu u Plzně has been retained to access JR176 to Radnice. See. 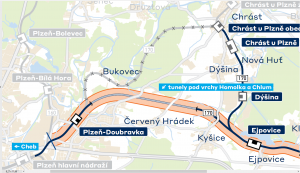 180 Doubling and electrification of this route from Plzeň to Furth im Wald is planned over the next year, with work due to have commenced on 01 March 2018 on the section from Plzeň hl.n - Vejprnice, the work involving re-alignment of the Route 170 flyover at Plzeň-Skvrňany.This double track section is scheduled for opening on 30 June 2019.

135 The upper section of this line between Dubi and Moldava v Krusnych horach remains bus replaced, although trains services were planned to re-commence with the December 2017 timetable change. Planned to re-start on 1 November 2018, services appear in the 2018-2019 Timetable.

240/244/250/260/300/340 Major reconstruction of Brno hlavni nádraží station, along with the signalling and control systems and bridge and track renewal, is taking place over the current timetable period until 14 December 2019 (See), resulting in closure of the station as a through route, with consequent alteration to all services (See). Through regional, IC and RegioJet trains are diverted via the Brno freight avoiding line (Brno-Horní Heršpice – Brno dolní nádraží – odb. Táborská – Brno-Židenice), calling at Brno dolní nádraží station. Regional and local services from Tables 250, 260 are diverted to Brno H.ln "north end" (Nástupiště (tracks) 1 - 4), calling at Brno Židenice; while similar services from Tables 240,244 terminate in Brno H.ln "south end" (Nástupiště (tracks) 5 & 6. Table 300 Regional services start from Brno Králove Pole and run via Brno Židenice while local services start from Brno Chrlice, with bus and tram connections from Brno hl.n. Most Table 340 services start and terminate at Brno Židenice, although some reverse there and run to and from Brno h.ln. As a consequence Route 340 Brno hl.n. to Brno-Slatina (odbočka Slatinská) via Brno-Černovice and Route 300 Brno hl.n. to Brno Chrlice are closed until 15 December 2019.

Meanwhile, the suggested closure of the existing Brno hlavni nádraží station and the main line running through it for redevelopment of the released land is still the policy of the City of Brno and the Region of South Moravia despite considerable opposition. As at June 2018 the latest position was The Central Committee of the Ministry of Transport is considering the four suggested alternatives for an underground transport connection from the proposed new station site by the Svratka River near Brno dolni nádraží on the existing freight line between odb. Černovice and Horní Heršpice. This new transit connection, which some people are calling “Brno’s subway”, is to connect the north of the city with the centre and the south but this and the new station are not yet funded.

291 The privately owned line from Šumperk to Kouty nad Desnou has been electrified, the 3km Sobotin branch remaining diesel operated. Both lines have now reverted to ČD operation.

097 Services between Lovosice and Radejčín were replaced by buses in June 2013 because of flood damage. On 29 March 2018 SŽDC announced that reconstruction of this section was too expensive and that the landslide-damaged section would be abandoned, with services remaining bus-replaced. See.

The long planned rail link from central Praha to Ruzyně Airport will involve double-tracking and 3 kV DC electrification of the Masarykovo - Dejvice - Praha-Ruzyně line, with a new branch to the airport. Reconstruction started in autumn 2017 of the 'Negrelli' viaduct over the Vltava river, just north of Praha Masarykovo, involving a total closure. The line is not expected to reopen until April 2020, during which time trains will terminate at Praha Bubny.

312 (Bruntál – Malá Moravká) may be at risk of total closure. A measuring train visited the line in July 2015 and a railtour in February 2016. However, following track repairs, services operating at weekends and on public holidays 30 June 2018 until 02 September 2018.

Significant realignment work has been a theme in recent years with completion of a higher speed allowing curve immediately to the east of Usti nad Orlici on the Praha - České Trebova main line and a new 2km section south of Veseli nad Lužnici on the Praha - České-Budějovice line. In the future there is a proposal to upgrade between Česká Lípa and Mimon on the line to Liberec by 2022 which would involve around 2km of line straightening plus the relocation of Zákupy station.

The re-opening and electrifying of the 3km branch from Hrošovany u Brna - Židlochovice which closed in 1979 is now funded and under way, targeting no later than the December 2020 timetable change.

Changes with the timetable commencing 15 December 2019

Changes with the timetable commencing 09 December 2018

Changes with the timetable commencing 10 December 2017

Changes with the timetable commencing 11 December 2016

Changes with the timetable commencing 13 December 2015

Changes with the timetable commencing 14 December 2014

For details of older changes dating back to the year 2001 see Czech Republic - Older General Information.

Many of the diesel routes are worked by railcars with trailers: some of these workings divide en route but may not be clearly marked. At busy junctions in the country areas it can be difficult to ascertain which is which train; often a notice placed on the ground near the train is the only clue. Sometimes a plate on the side of the railcar will show the train's destination, but these are not always correct; also, beware of some vehicles, especially un-powered coaches, terminating short of the final destination.

At the following locations trains on the indicated route make a reversal manoeuvre away from the main station area: