From EGTRE
Jump to navigationJump to search

This list is based on the timetable dated 15 December 2019 – 12 December 2020. Standard abbreviations used are explained in General Information document. Trains running only certain days of the week are shown using ISO 8601 weekday numbers (https://en.wikipedia.org/wiki/ISO_week_date )

In the heading to each entry the map reference for the line in the Schweers+Wall Eisenbahnatlas Schweiz (2012 edition) is shown, in italic, in addition to the reference, prefixed by 'ERA' to M.G. Ball's European Railway Atlas (2016 edition).

This extension of the Lancy-Pont-Rouge line, to a halt in La Praille marshalling yard, is used by special or extended trains for home football matches of Servette FC at the nearby stadium. Details of fixtures may be found at www.servettefc.ch.

This north to west curve connects the Neuchâtel and Genève lines and is used by hourly IC trains not booked to call intermediately between Yverdon and Morges.

The Bern - Neuchâtel and Payerne - Lyss lines cross at Kerzers by means of a flat crossing, with platforms 1 and 3 on the Lyss line, and platforms 4 and 6 on the Neuchâtel line. A short curve from the Neuchâtel platforms towards Payerne is used by the hourly S5 stopping services between Bern and Murten/Morat, which reverse in platform 4 and use the curve between calls at Kerzers and Galmiz, as well as the Murten/Morat - Kerzers short services, operated by the same unit between Bern turns. The curve from the Lyss platforms towards Bern is done by a majority of the hourly S52 Bern to Kerzers services, which run into platform 3. The connection between the Lyss platforms and the Payerne line is done by the following services which are booked to use platform 3. N.B. Some of the trains below run every day but only use platform 3 on weekdays ((1)-(5)).

This north to east curve enables trains to run between the Olten and Interlaken lines without reversal.

There are two double-track routes between Bern and Bern Weyermannshaus where lines to Belp, Kerzers and Flamatt diverge.

The southern pair are SBB, on the surface throughout, and are used mainly by trains via Flamatt, running to and from the lower numbered platforms at Bern.

The northern pair are BLS, pass through the Donnerbühl Tunnel, and are used mainly by trains via Belp or Kerzers, or to Schwarzenburg, running to and from the high-numbered platforms (up to 13, but not 21-24 which are the RBS low level station) at Bern.

However, there are exceptions:

The Lötschberg Base Tunnel is used by non-stop trains between Spiez and Visp. Between Abzw. Wengi-Ey and Abzw. Adelrain, at the northern end of the tunnel, trains may either run through the single-track Engstige Tunnel or stay on the old line, gaining the tunnel by running through platform 2 at Frutigen station. This depends on operating convenience.

There is a single track connection between the north portal of the Lötschberg Base Tunnel and the east side of Frutigen station. This is used by trains using the Basistunnel which call at Frutigen platform 3. It is not possible for trains to reach platforms 1 or 2 using this connection. No services use this connection in the present timetable.

This connection onto the Olten - Bern high speed line is used by trains calling at Burgdorf and running non-stop between there and Bern.

This branch off the Olten - Bern high speed line is used by trains non-stop between Olten and Solothurn.

Zürich - Bern and Luzern - Bern trains not stopping intermediately between Rothrist and Bern use the new direct line, while stopping trains use the original route. Zürich - Solothurn trains (see CH20/09) and non-stop trains between Burgdorf and Bern (see CH20/08) use parts of the direct line.

This line opened in 1981, but now forms the northern part of the Olten - Bern high speed line. It is used by trains between Olten and Langenthal or Bern which do not stop at Aarburg-Oftringen, also by trains non-stop between Olten and Solothurn. Note, however, that IR trains terminating in Olten have been observed being routed via Aarburg-Oftringen instead of via this route.

This west to south curve links the lines from Bern and from Luzern to Olten. It is used by the hourly IR Service between Bern and Luzern via Zofingen. (Note that trains via this curve normally use the connection off the south side of the main line at Rothrist in both directions. Only the local services from Rothrist to Aarburg-Oftringen use the dive-under).

Fast trains between Basel and Liestal not booked to call intermediately use this line which passes through the Adler tunnel (5.3km). 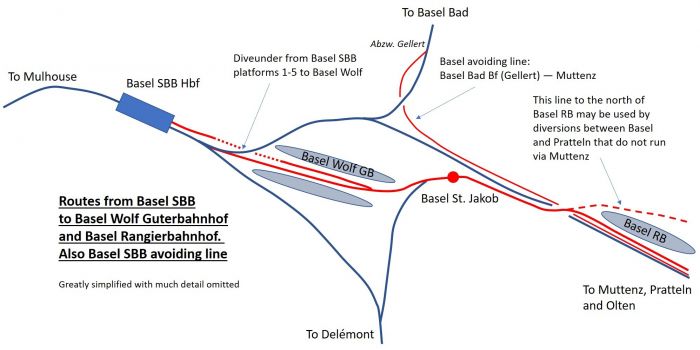 This north to east curve enables trains to run between the DB station at Basel Bad and the Olten/Zürich main line without reversal.

The curve has no booked passenger use but additional trains sometimes operate to Basel Bad Bf for exhibitions and trade fairs, details of which can be obtained from Messe Basel, Messeplatz, CH-4021 Basel; fax +41 61 686 21 94. A regular schedule is 07:56 Zürich HB - Basel Bad Bf.

An alternative to the normal main line east out of Basel, via high level lines through Basel Güterbahnhof and the overbridge approach to the west end of Basel Rangierbahnhof, thence by a spur to Muttenz station.

For pathing reasons, the S3 local service Laufen - Basel SBB (reverse) - Olten is booked to use this route to and from platforms on the south side of Basel SBB station.

Special trains operate for FC Basel home matches to a platform adjacent to the St Jakob stadium, on the the route from Basel SBB to Muttenz via Gbf Wolf (CH20/15). Outward trains from platforms 1 to 5 use the new diveunder route beneath the station throat to Basel Gbf, but trains from other platforms follow the ground-level route.

For evening matches, there is normally just one outward train, at 18:45 from platform 4 at Basel SBB. Return trains - at 21:30 and 22:07 - generally follow route CH20/15. Routing and timing variations occur from game to game: timings and departure platforms are advertised by paper notices at each platform entrance, usually the day before a match.

Information on FC Basel matches can be found at www.fcb.ch.

The hourly service of IR trains between Basel SBB and Zürich HB, calling at Sissach and Aarau, uses this north-to-east curve to avoid reversal at Olten.

Trains via the low level platforms, 31 to 34, at Zurich HB are local services S2, S8, S14 and S19, plus most long-distance ones via Oerlikon and Altstetten. Westbound long-distance trains, but not local ones, also use the new flyover line to Zürich Altstetten. These are departures from Zürich HB hourly:

Fast trains between Zürich HB and Thalwil not booked to call intermediately use this line which passes through the Zimmerberg-Basistunnel (9.4km).

Steam trains run on 7 days from Zürich Wiedikon to Sihlbrugg via a connection not normally used by passenger trains.

This curve is used by an hourly RE service between Herisau and Konstanz.

This curve enables trains to use an alternative route between Rorschach and Winterthur without reversal at Romanshorn.

There is no booked service but this route is often used for diversions when the Buchs SG - Feldkirch line is closed for engineering works. This has occurred in late April and early May, and applied to the following trains:

The curve can also be done when VHMthB are running their "Uferdampffahrten" Romanshorn-Rorschach and return. The trains use bay platform 1 at Romanshorn and, to avoid propelling out of the station to run round and propelling in again, the train from Rorschach takes the avoiding line and then propells into Romanshorn station.

There are generally three round trips on operating days. Further details can be found on their website at http://www.mthb.ch/fahrten-veranstaltungen/oeffentliche-fahrten.html#veranstaltungsliste .

This is the south-west curve out of the Vereina Tunnel, on which services commenced 28 May 2000. Note that the north point of the triangle, at Sasslatsch Nord, is inside the tunnel. It is used by a roughly two hourly service between St Moritz and Landquart. These trains are shown in the timetable as not stopping between Susch and Klosters Platz.

This private railway has no regular passenger trains but special public services are provided on various dates, in conjunction with Dampfbahnverein Surental (DVS) www.sursee-triengen-bahn.ch/dampffahrten-erleben/oeffentliche-fahrten.html, including the traditional fourth Sunday in September.

This 250 metre extension northwards from the normal terminus, adjoining Capolago-Riva San Vitale FFS station, is used to connect with the seasonal calls of vessels of Società Navigazione del Lago di Lugano. Vessel calls and trains are subject to suspension during rough weather or in times of poor visibility.

The following lines have few trains (relative to service levels generally in this country) — fewer than five trains each way on at least three days a week.

The following lines do not have service throughout the winter: